Yesterday I took day one of a watercolor workshop with Carol Carpenter, and I really enjoyed loosening up with her exercises and seeing her brushstrokes and how she approaches a painting.  She gave us copious notes on all aspects of what she was showing us which was very nice. 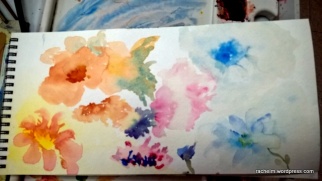 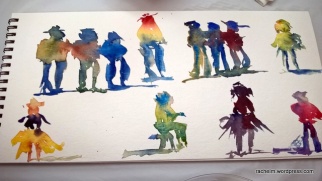 The top two are exercises in softening edges of circles, changing the shape, going back in and adding if you wanted…some became  flowers.  The second is called “three amigos”.  blobs of three colors which became torsos with the addition of heads and legs and their shadows…all done while holding the brush high up on the handle to loosen up. I used a dagger brush for these.  way fun!

Another exercise was to make a painting of three flowers in 15 mins with using only 15 brush strokes….this keeps you thinking of how to get colors spread out and keeping the brush on the paper. she does this exercise to warm up several times a week, and I can see how helpful it would be to incorporate into my studio time.

The bottom is an in process piece of snow on mountains in shadow.  I’ll do more work on this today. 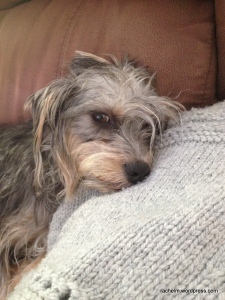 Photo of Tulie chillaxing after the dog park

The other morning at the dogpark around 10 I was looking at figures that were backlit by the sun.  Fascinating because I’d never thought to look at them in an artistic light.  Looking at them as a painter, the easier dogs to use for focal point ( lightest light against the darkest dark) are the shaggy dogs with the fan tails, like Tulie. You can clearly see the backlit whitish ridges on backs or tails against their darker bodies.   Those hit me over the head with their “Wow, look at me!” vibe

Secondly I looked at the people.  I don’t know if it was a coincidence, but it appeared to me that the people with the lighter hair also had more of their face lit, where the man with a shock of darker hair appeared to have a darker face from across the park. I squinted and it stayed the same.  I am assuming the lighter hair bounces around the face and lightens it up and you could see just the slightest suggestion of a nose or an eye, where as the dark haired man in  a painting would have a gray/blue face with no facial features. 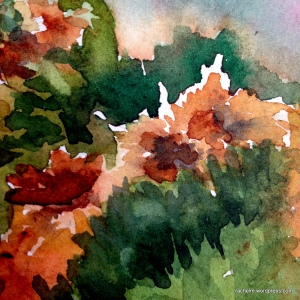 The idea occurred to me that I should bring my paints and a scrap piece and practice figure painting while Tulie romps with the other dogs.  When my easel gets here, that’ll be a place to go.

Speaking of backlit, here’s a snippet of a plein air painting of mums in my backyard… 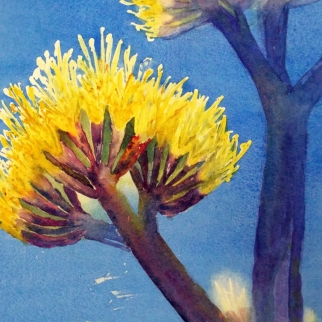 Up in the Air original watercolor by Rachel Murphree 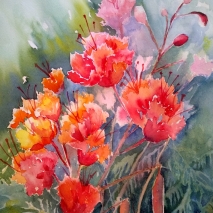 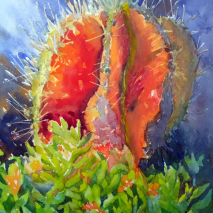 Spurge Among the Prickly Pear (sold) 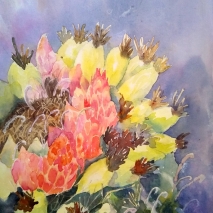